Proton-coupled electron transfer (PCET) has become recognized as a fundamental reaction of great importance in broad areas of chemistry and biology. These include biological energy 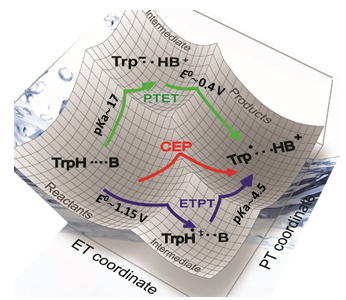 conversion, DNA reproduction and repair, chemical water splitting, fuel cells and interfacial electron transfer of semiconductors. Many of these are multi-electron transfer reactions coupling several electrons and protons to form the products.

We work with experimental tools to distinguish step-wise and concerted PCET mechanisms, and determine conditions allowing for concerted reactions in multi-electron/-proton reactions. We argue that concerted reaction steps may result in lower barriers (overpotentials) in e.g. solar fuels catalysis.

We demonstrated activation of rather non-polar metal-hydrides by concerted PCET for the first time. This is quite different from the hydrogen atom transfer (HAT) conventionally thought to occur in such reactions, and of great fundamental interest and practical importance for solar fuels catalysis and organic synthesis by (photo)redox catalysis.

By appending internal base groups as proton acceptor to the [(Cp)W(CO)3H] complex (collaboration with Sascha Ott), we could show greatly accelerated PCET reactions by facilitated PCET – a direct kinetic demonstration of the effect on reactivity of the 2nd coordination sphere. This complex was also the first example of a single compound that could undergo all three types of PCET mechanisms – concerted, electron-first or proton-first – by changing the oxidant strength. 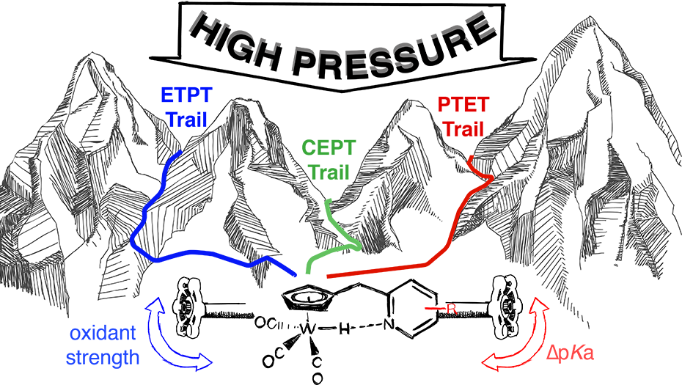 Hydrogen bonds involving the transferring proton has large effects on the rate that affects the proton tunnelling distance, and often also the anharmonicity of the proton potential. We have investigated homologous series of compounds and demonstrated an exponential decrease in the rate constant with increasing proton tunnelling distance (JACS 2011, p. 13224). In (JACS 2017, p. 2090) the rate attenuation factor was ~10 Å-1, which is a strong distance dependence, yet much weaker than expected for a static system with harmonic potentials (~30 Å-1). This we assigned to (1) participation of excited vibronic states, and (2) thermal distribution of tunnelling distances r where the fraction with r < r0 dominates the reactivity. These effects greatly accelerate CEPT rates in general, and explain why kinetic isotope effects for concerted PCET are in most cases quite modest (< 3). 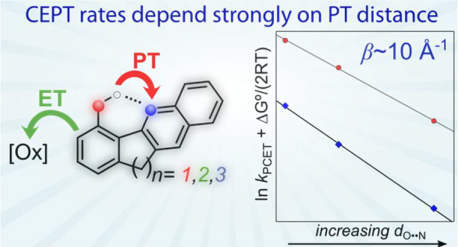 The Marcus inverted region (MIR) for electron transfer, where the rate at high driving force decreases with further increase of the driving force, was a controversial prediction. Its experimental demonstration was therefore an important scientific landmark. The corresponding effect for concerted PCET has been predicted to be absent, due to the many contributing vibronic transitions. Thus, our recent first demonstration of MIR for PCET, in collaboration with James Mayer and Sharon Hammes-Schiffer and their groups at Yale, was an interesting surprise. Our calculations (Hammes-Schiffer) could explain the details of the protonic protonic wavefunctions that allowed MIR. 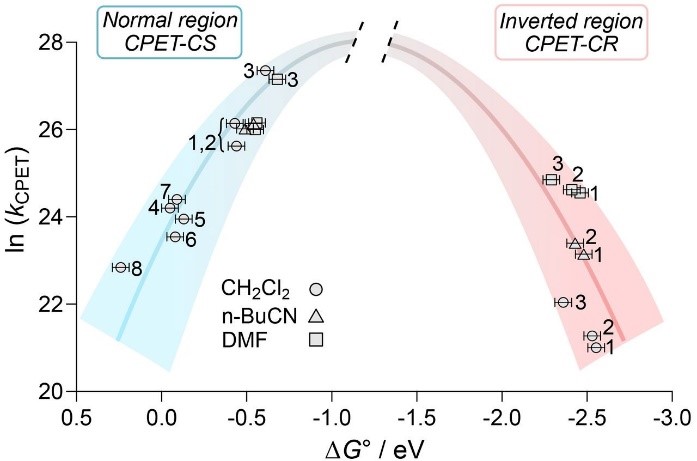 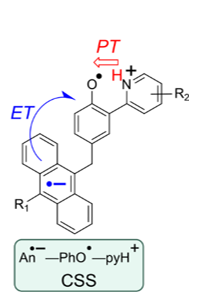