Researchers from the Department of Chemistry – Ångström laboratory within the division of Inorganic Chemistry at Uppsala University in collaboration with groups at the Institute for Energy Technology (Norway), Sandia national laboratories (US) and the ISIS Neutron and Muon source (UK) have recently been locating the position of hydrogen while leaving High Entropy Alloy based materials.

Why is this of interest?

Hydrogen is seen as one of the most promising solutions to large-scale energy storage when switching electricity production from fossil to renewable energy sources due to its vast abundance and high gravimetric energy density. Storing and handling compressed gaseous hydrogen does, however, come with several challenges such as inherent safety aspects and the high cost of compression. Instead, hydrogen can be stored in the solid state using a metal hydride, which offers improved safety and higher volumetric energy densities. An emerging field within the metal hydride community is High Entropy Alloy (HEA) based metal hydrides. The vast compositional space generated by this type of alloy design should enable tailoring of the hydrogen sorption properties to a targeted application. Developing such design rules however requires detailed knowledge of the position of hydrogen in these alloys during operation.

How is it done?

Hydrogen is practically invisible to X-rays, which is a common probe to study solid-state materials, making such techniques unviable for these needs. Luckily, it is very visible to neutrons if we use its heavier isotope deuterium. Neutrons also interact weakly with most matter, enabling us to put additional measurement devices in the neutron beam. In this case, we would like to measure the mass loss as deuterium is leaving the material with a balance. Knowing the exact amount of deuterium by weight in addition with the structural information from neutron diffraction would enable us to locate deuterium within the material with a much higher accuracy.

The experiment was done on a sample series of High Entropy Alloy metal deuterides with increasing chemical complexity at the Polaris beamline at ISIS neutron and Muon source in Oxfordshire, UK. The results showed that for the least complex system (TiVNb), deuterium leaves the material in a single step, but by adding additional elements (Zr and Hf) this turns into multiple ones. Adding Zr makes the deuterium jump from one position (tetrahedral geometry) to another (octahedral geometry) before leaving the material. Subsequently adding Hf to a five component system increases the complexity during the later stages of hydrogen (deuterium) release. 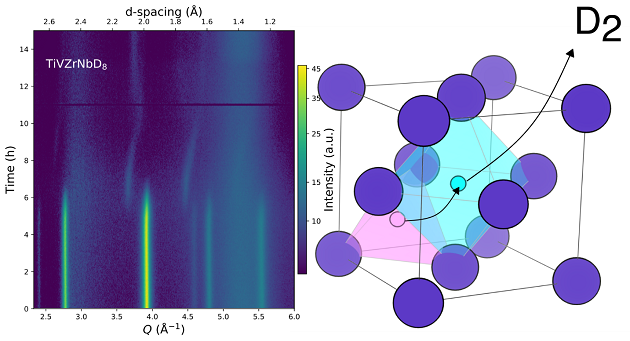