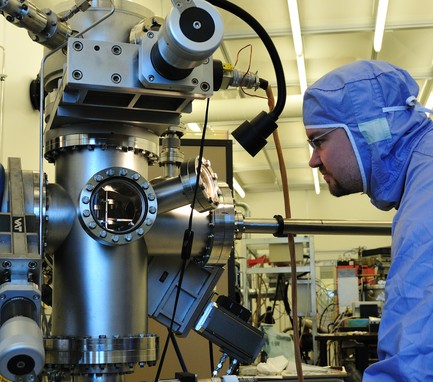 The Inorganic Chemistry programme has a very large activity on thin film materials for a wide range of applications. Synthesis from gas phase is described here, but thin films are also synthesised from solution. Many of our materials are metastable and difficult, or impossible, to synthesise as bulk material. A main goal in this activity is to be able to control phase composition, chemical composition and microstructure in order to synthesise films with well-controlled properties. We are working with several techniques: magnetron sputtering, chemical vapour deposition (CVD) as well as with atomic layer deposition (ALD); and our projects range from fundamental research to close collaboration with industrial partners.

We use magnetron sputtering to synthesise and characterise new thin film materials based on carbides, borides and oxides. The films are often deposited far from equilibrium, leading to the formation of metastable crystalline films as well as amorphous structures.  We can easily tune the process parameters to control the microstructure and form nanostructured films with special properties. An important aim of our projects is to study how phase composition, chemical bonding and microstructure influence chemical and physical properties of the films. Some examples of projects are: 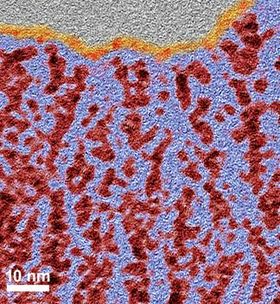 CVD (chemical vapor deposition) and ALD (atomic layer deposition) are well established thin film techniques and are complementary to PVD (physical vapor deposition). The advantage with CVD and ALD is the step coverage allowing complicated (or even porous) substrates to be evenly coated. Most materials can be deposited by CVD/ALD today which has resulted in numerous industrial uses. All computer memories (DRAM) are made using ALD and CVD of Ti(C,N) and Al2O3 are examples of tribological coatings used on cemented carbide inserts.

The main objectives of the projects are to investigate and design new CVD/ALD processes with respect to phase content and/or microstructure.  The new processes will be important for fundamental research and will also be of strategic importance for Swedish industry.  A continuous interaction between academia and industry is ongoing exemplified by several industrial PhD students within the group.

Research areas in the CVD/ALD group are

The project aims to develop a new class of advanced materials with tuneable band gap, replacing a wide range of materials based on less abundant and expensive elements. Applications where a controllable band gap is relevant include solar cells, heterogeneous catalysis, water splitting, and optoelectronic devices. Such a replacement scheme will enable large-scale implementation of technologies that today are limited by price or availability of specific elements. By using the possibilities of vapour deposition techniques to form metastable solid solution phases based on simple crystal structures, specifically transition metals in period four together with nitrogen and/or oxygen. In these materials the band gap will be controlled by alloying, either on the metal or non-metal sites of the structure. The studied materials will thus have the general formula (M1-xMex)Oy-zNz. The aim is to design the electronic and optical properties over a wide range (from metallic conduction found in transition metal nitrides to dielectric behaviour found in transition metal oxides) using simple design rules. Thin film synthesis is carried out in an ultra high vacuum magnetron sputtering system, using a combinatorial approach to enable high-throughput screening of systems and compositions. 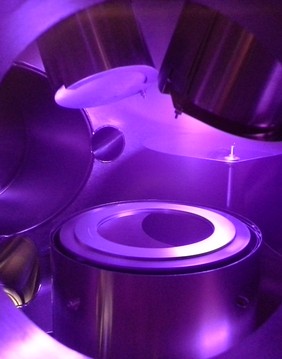